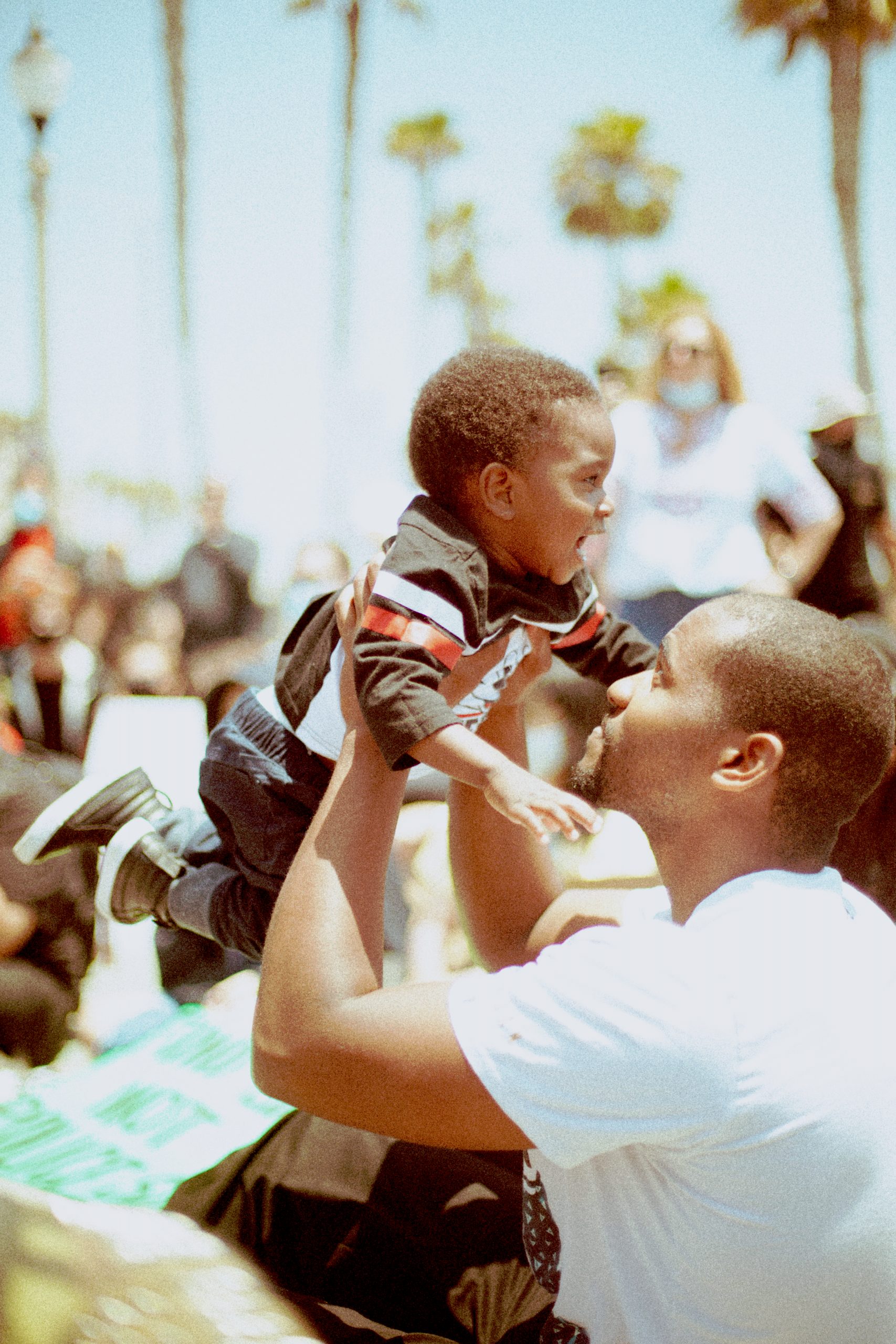 Huntington Beach has been the site of many protests over the years. Surf City-based professional photographer Mandy Rosen has attended and covered many-a-protests. Here she shares her stunning photographs and personal insights on the Black Lives Matter movement. 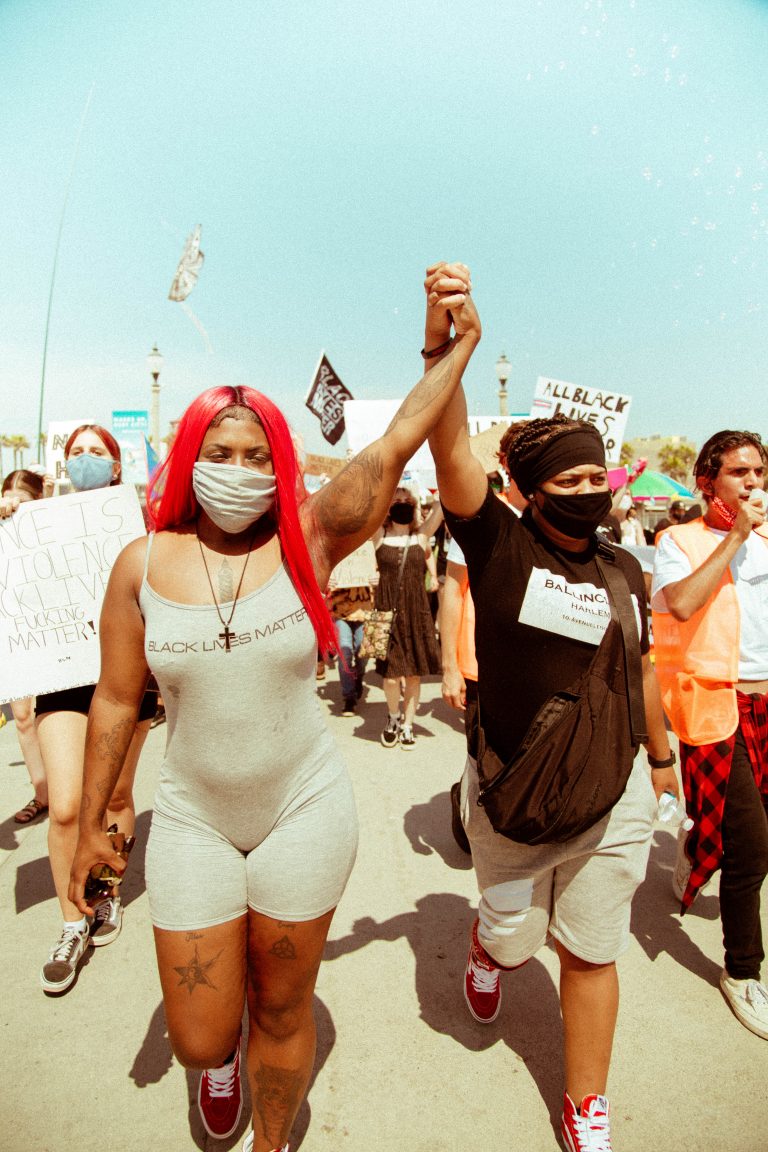 Since the death of George Floyd, the Black Lives Matter (BLM) protests have been consistently attracting large crowds. The protests have continued for 4 months.

People of color do not feel heard in Huntington Beach. The most recent BLM protest attracted a larger crowd than usual. Residents and non-residents joined together to protest the bigotry problem that many believe to be the reputation of Huntington Beach. During the protest on September 6th, the protesters marched through Main Street unplanned.

I knew that, marching through Main Street on a Sunday Labor Day weekend with Trump supporters eating brunch, sounded like a crazy idea. It wasn’t so bad, despite many confrontational moments. Many anti-protesters argued that the protest was “disrupting businesses.” This was the only protest that took place through Main Street unplanned, and it was over in about 20 minutes. 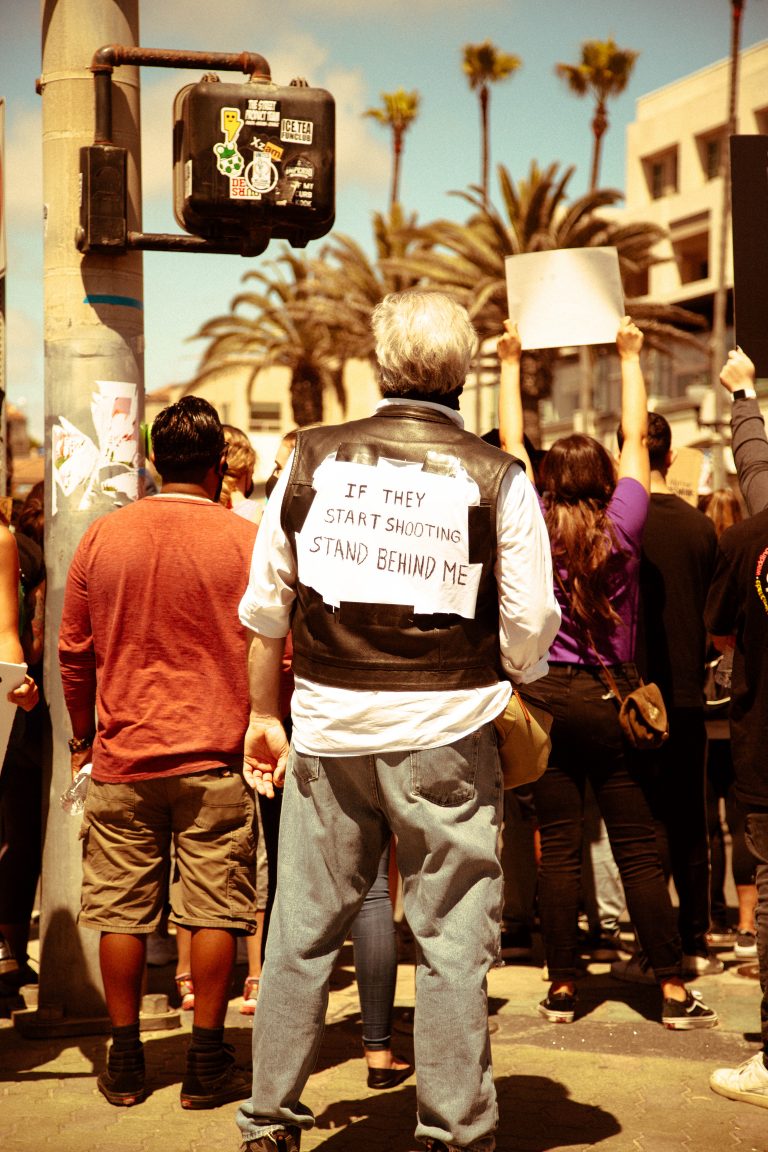 After taking the photo, I realized the sign on his back was attached to a bullet proof vest. I never saw the front of his face, but from the back he reminded me of Clint Eastwood in the movie Gran Torino. At the end, Eastwood’s character gave his life in order to protect a group of young kids who were being harassed by a gang of racists. 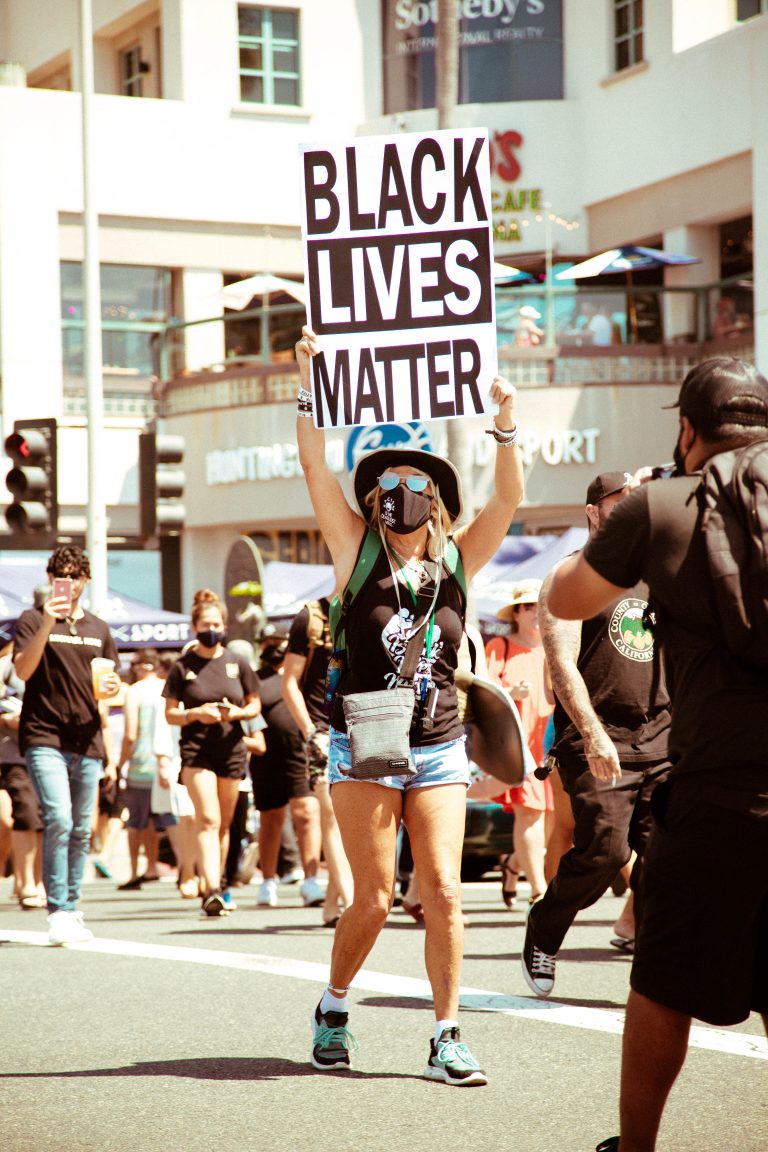 I find it very interesting that massive protests occurred to reopen businesses in Huntington Beach when COVID-19 first struck. Yet, when the first BLM protest occurred in Huntington Beach, the majority of residents protested the protest. It was happening all over the place when I first stepped out of the Uber and made my way downtown. I was taken aback, since I have never seen that behavior in Huntington Beach, and I grew up here. I had come to the protest with the intention of taking pictures, and it didn’t occur to me to film videos until I saw how intense the confrontations were. 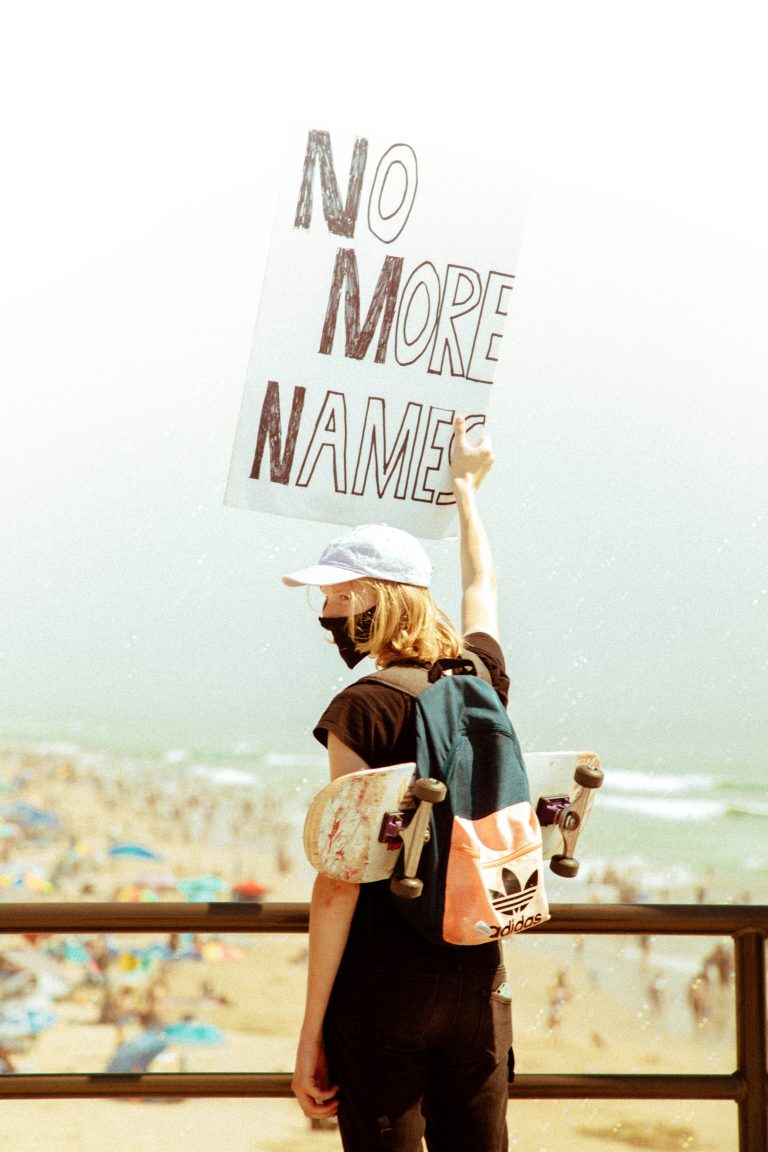 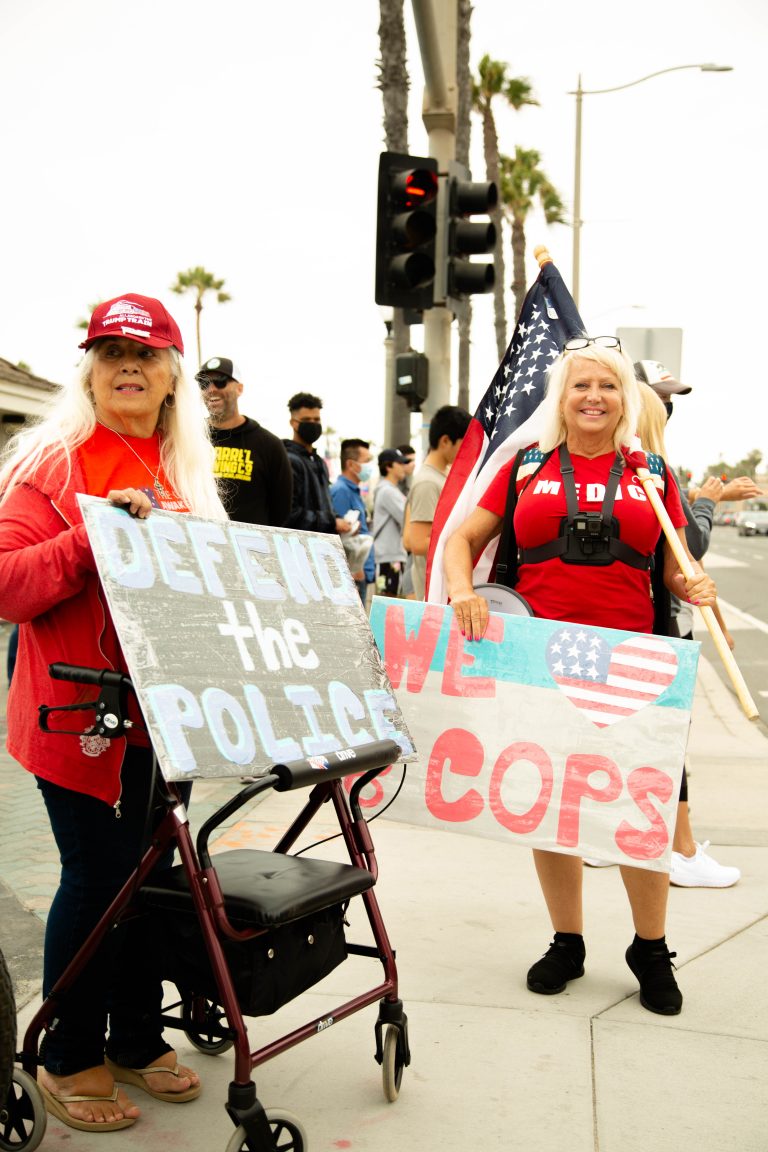 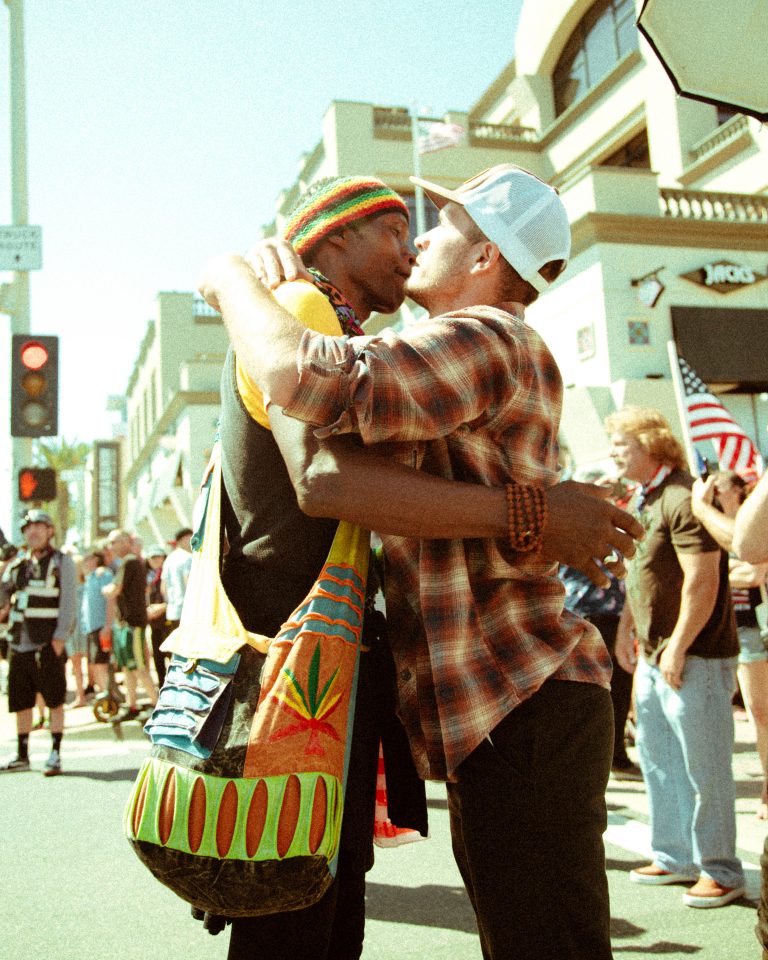 This photo was taken at the most recent protest in Huntington Beach. It was September 6th on a Sunday on  Labor Day weekend. The beaches were packed and hardly any anti-protesters were wearing masks. This photo was taken while marching up and down the pier. The protesters marched down the pier before marching through Main Street. The protesters used mega phones and chanted slogans towards the beach goers below. 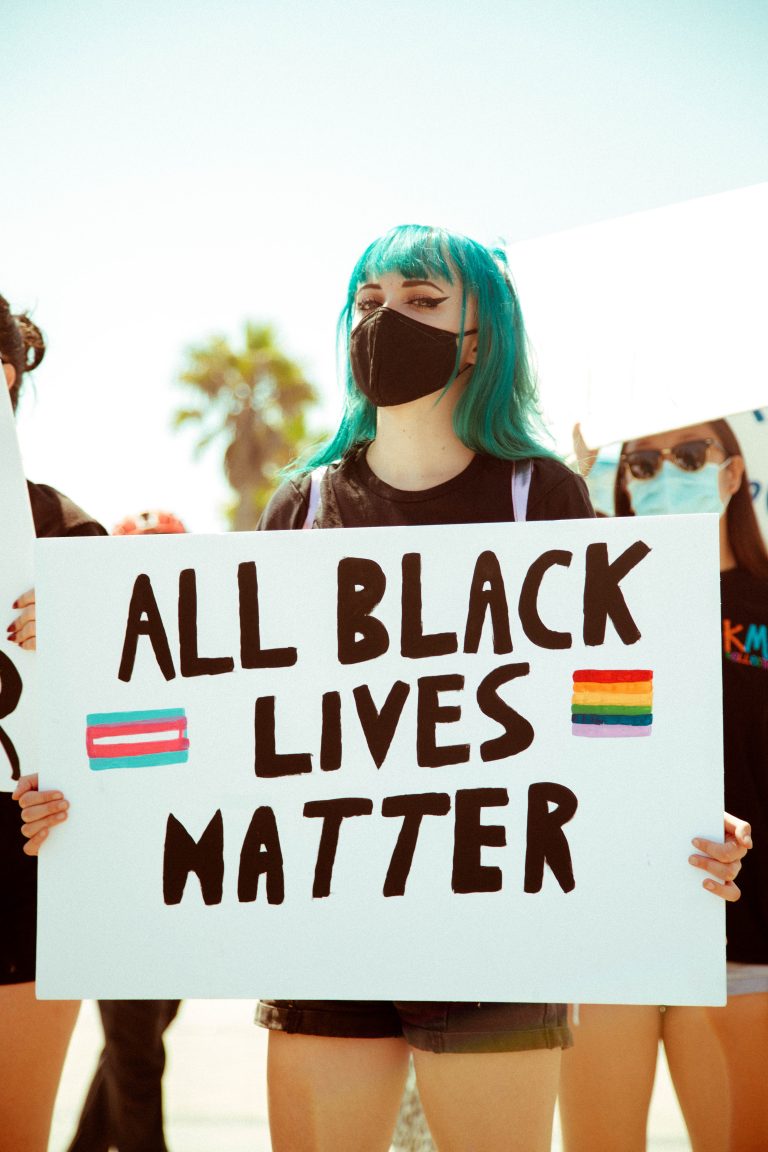 Many anti-protesters claim that the BLM movement argues for only black lives. I have attended many protests in Southern California and I have never seen a sign, or heard anybody say, that “only black lives matter.” I believe there is a misunderstanding with anti-protesters who believe that the BLM movement is propagating superiority and discrimination against all races. 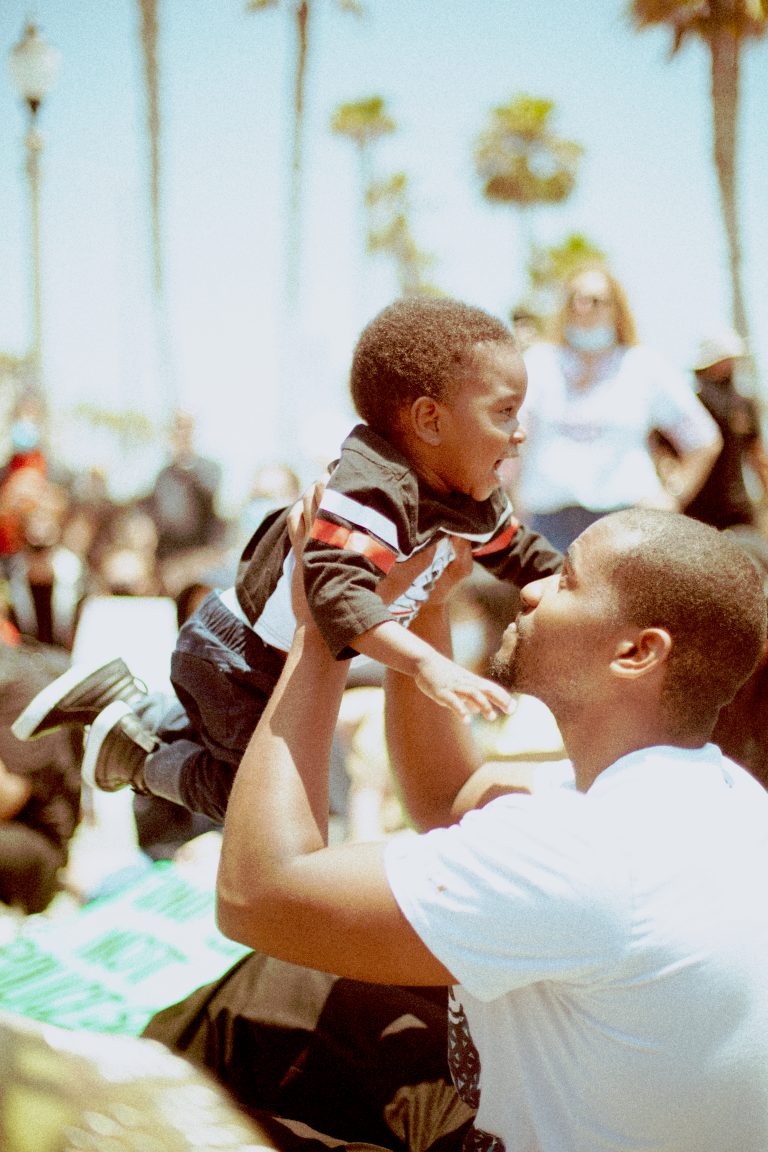 “We’re out here, fighting for you. So that you don’t have to.” These words were voiced through a megaphone by one of the protest speakers, directed at the young child in this photo. This picture was taken after the crowd addressed the young child. I love witnessing positive and powerful moments like that during protests. 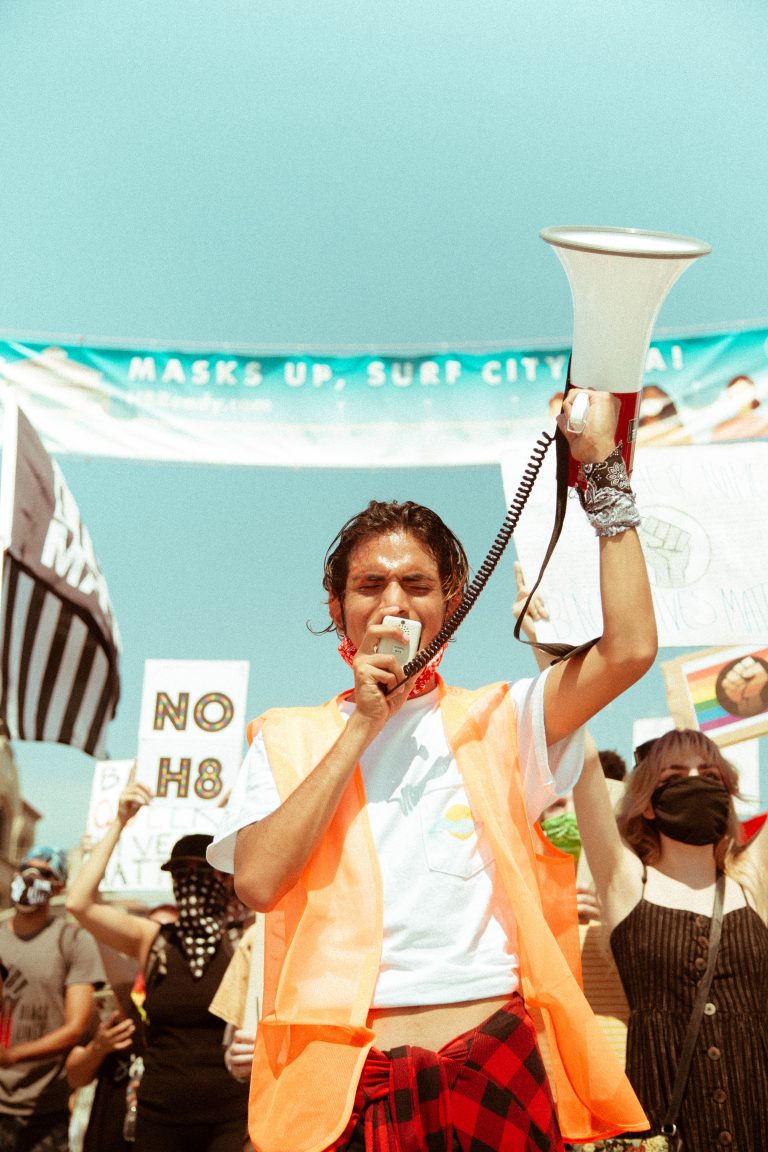 The most recent protest was organized by Zodiac, as seen in this photo.  Zodiac is one of the bravest people I have met at the protests. He will burn sage behind the backs of hecklers, dance with pride in the faces of homophobic racists, and lead the protest group with inspiring strength. 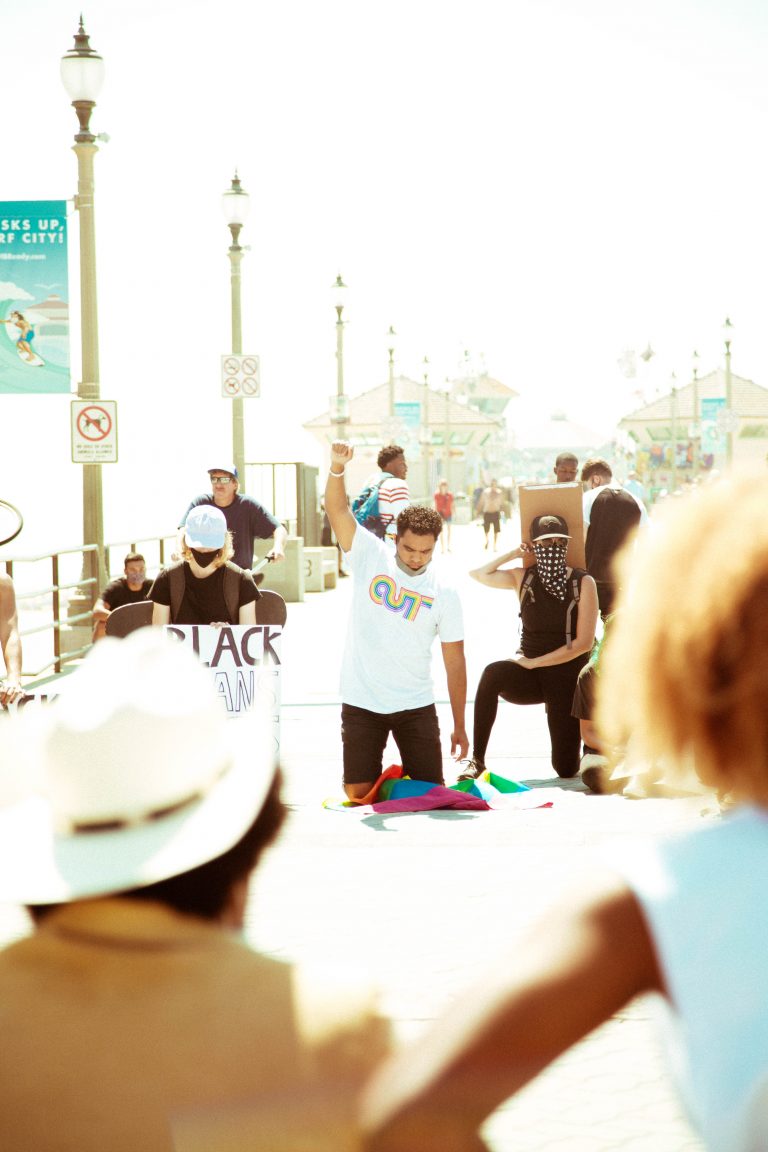 This picture was taken while the protestors were taking a knee in honor of black lives. The man with his first in the air had been leading the march up and down the pier with a megaphone. The group was formed in a circle at the time. You could feel the solidarity.

* All text and photos by Mandy Rosen

Mandy Rosen is a Huntington Beach-based professional photographer and videographer. You can see more of her work on www.mandyyrosen.com 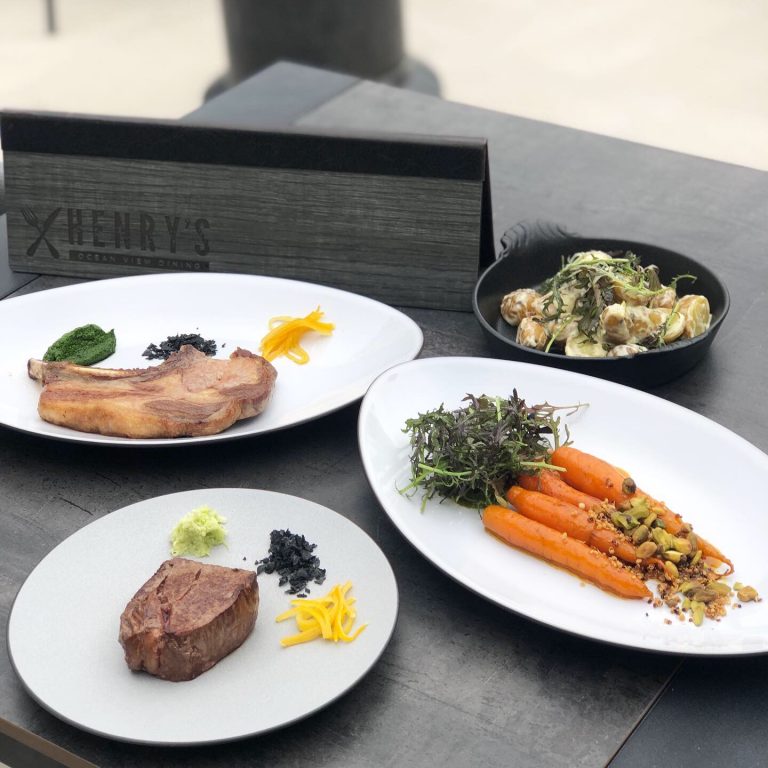 Accessible Five-Star Dining in Downtown Huntington Beach Words: JSP Jacobs Pictures: Marcie Taylor The fanciest meal I’ve eaten this year was when I sprang $2.19 for extra guacamole on the burrito I ate at my desk between classes. So, I admit, though I consider myself a food connoisseur, I didn’t have a high standard when…

Two things I love about Surf City mamas — we support each other and we get together to support a good cause! The MOMS Club of Huntington Beach South is hosting a Sip & Shop Snowflake Boutique to benefit Project Self-Sufficiency, a non-profit which “assists low-income, single parents in achieving economic independence from governmental assistance…

By Guest Blogger Erika Reardon of Erika’s Catering Fall is my favorite time of year! Gardens and markets are full of vegetables and fruits that simply speak to me! And apples are the ones I hear over all other. Maybe it is my New York roots or my appreciation for such a multi tasking food… 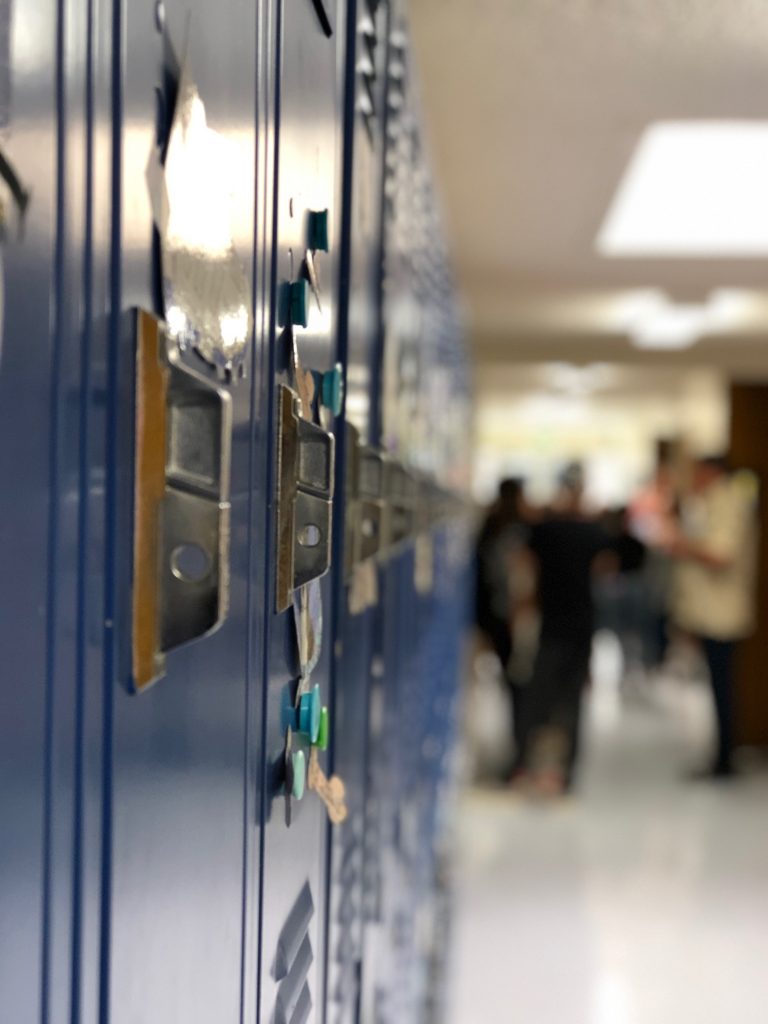 This year has been wonderful in many ways. Yes, you read that right. I could sit here and list all of the ways in which 2020 has kicked us all in the teeth and been a year of struggles, but as I reflect on this year, I find there have been many positives to come… 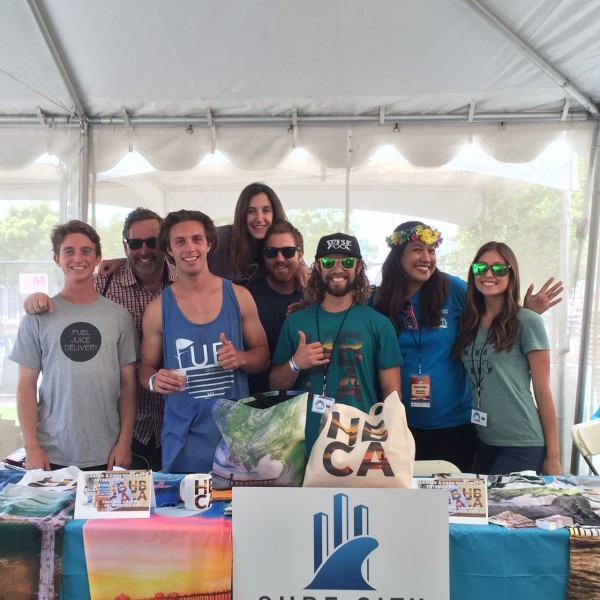 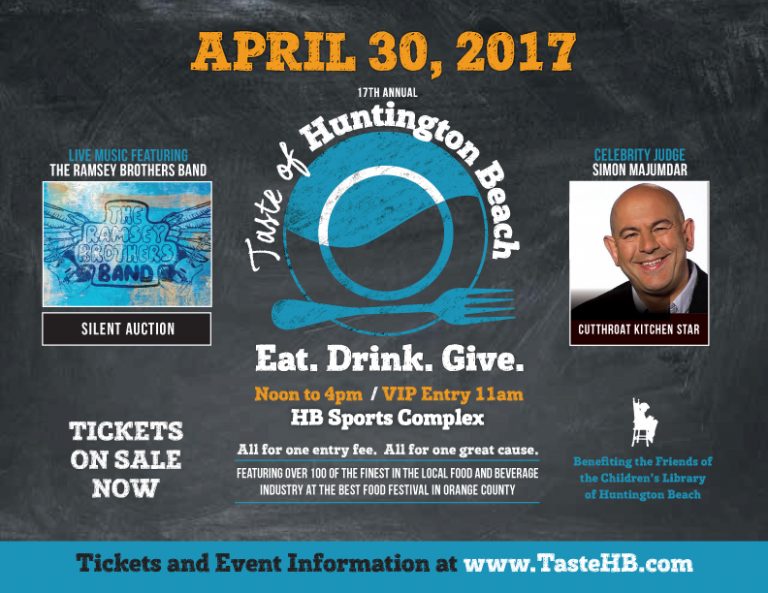